The Doctor has arrived in Trinidad

First time ever in Trinidad and Tobago, this couple can only be described as fire. Dr Kizomba and his partner Flavie reside in Montreal, Canada. The name of their school is Kizomba Canada. No one knew who they were until they arrived in Trinidad, but boy… did they surprise everyone! As soon as they touched down at the airport, they were ready to party.

The workshops were on fire. The party, show and competition were amazing. Dr Kizomba and Flavie were known as the life of the party. Everyone wanted to be around them as they brought great vibes and positivity. We would welcome them back here anytime as they left people wanting more.

Big respect to you guys!!! Hoping to see you all in the near future. 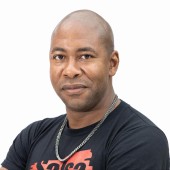 Kizomba Mania with Isabelle and Felicien